The Best of Pemberton 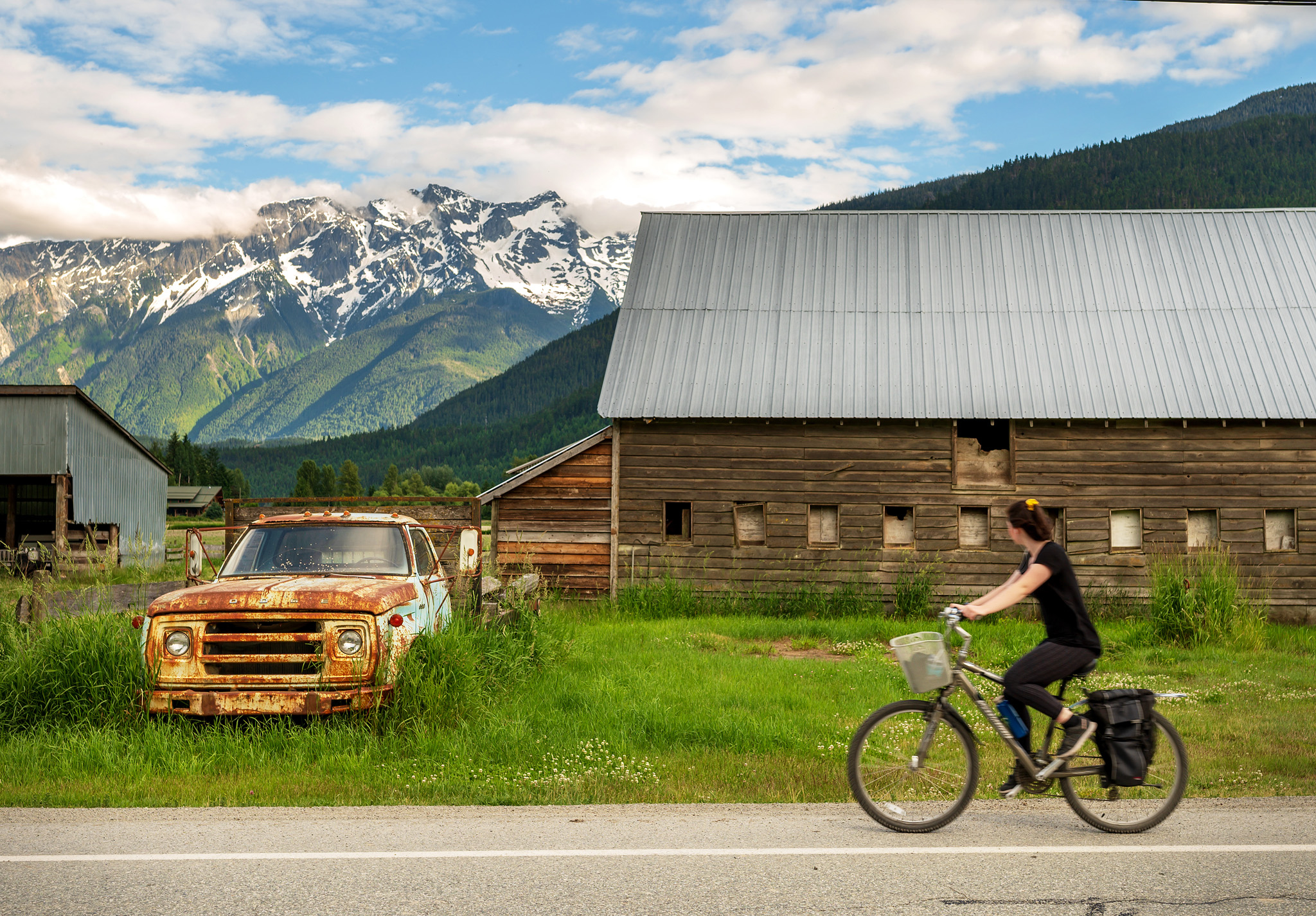 A woman rides past an old farm truck with Mt. Currie in the background along Pemberton Meadows Road.

For the lead photo of the girl on the bike, that was kind of a fluke.  I had driven up and down Pemberton Meadows Road a few times and kept noticing this old truck parked in front of one of the local farms and thought it would make a great shot to illustrate the Best Neighbourhood, Pemberton Meadows, category.  There was a great view of the iconic Mt. Currie in the background as well.  As I got out of my truck, a girl on a bike rode by on her way up the meadows.  I kind of kicked myself for missing the shot, but as I was waiting around for the sun to move out from in front of the sun, the girl rode back down the road and lined up perfectly.  As she came by I fired off a sequence on my camera and then she was gone.  I even like the flat light on the farm, although it took some doing in Photoshop to balance out the light with the sun on Mt. Currie in the background.

This year I got what I’ve considered one of the best magazine photography gigs in the Sea to Sky region, the Pique Magazine’s annual Best of Pemberton feature.  Every year the Pique runs a survey to see what the community thinks best represents the community.  Once that’s done, the photographer gets a list of names and categories and then is left to figure out how to illustrate the feature on their own.

Pemberton is one of the hottest, by temperature, towns in Canada, and I shot this over four days last July summer that turned out to be the worst heat wave in Canadian history.  The days were well over 45 degrees, which made me think of my days as a photojournalist in Africa in the 90’s.  It made it a really physically trying assignment, but none the less really a rewarding experience. 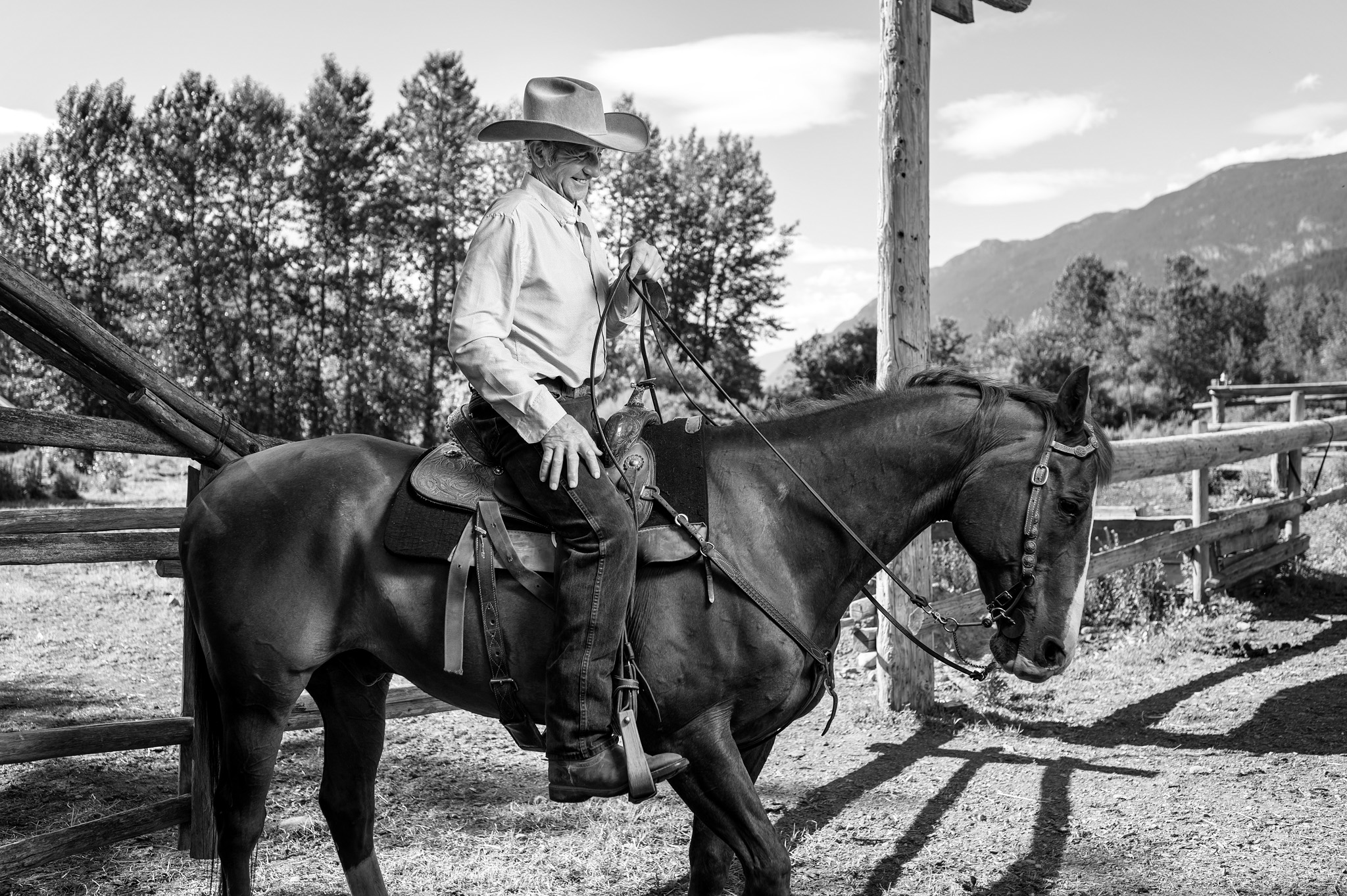 My old friend Bob Menzel was voted Favourite Pembertonian.  Bob and I have known each other for nearly 30 years.  He took me for my first horse ride back in the early 1990’s while I was working on another magazine story on Pemberton.  I tried to get off the horse with my camera slung around my neck, and as I stepped down, the camera swung around on it’s strap and hit me square between the eyes, knocking me out cold.  We both got a laugh out of that story. 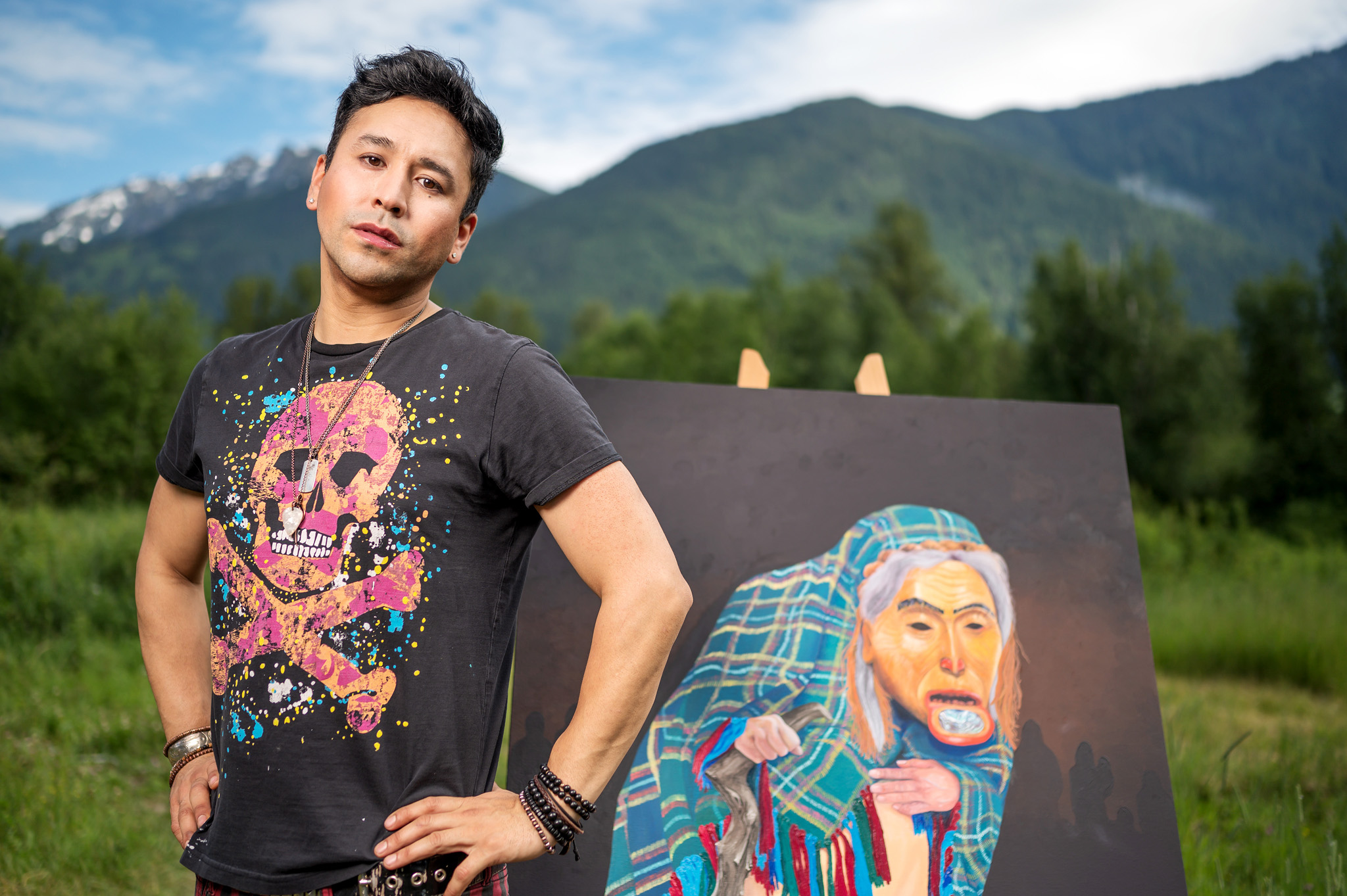 Levi Nelson, the Favourite Pemberton Artist/Artisan was a lot of fun as well.  He’s a really talented first nations artist getting a lot of international attention, but still working in the Mt. Currie reserve.  Just getting to his studio was a effort, down some narrow lanes behind the Mt. Currie village.  We shot this in his back yard, which looks right outward towards Lillooet Lake.  I did a few fairly conventional shots of him which wasn’t working so well, and then he said he wanted to look like a young dangerous artist (which he totally is), so I said, alright, let’s do this.  I thought the photos turned out great. 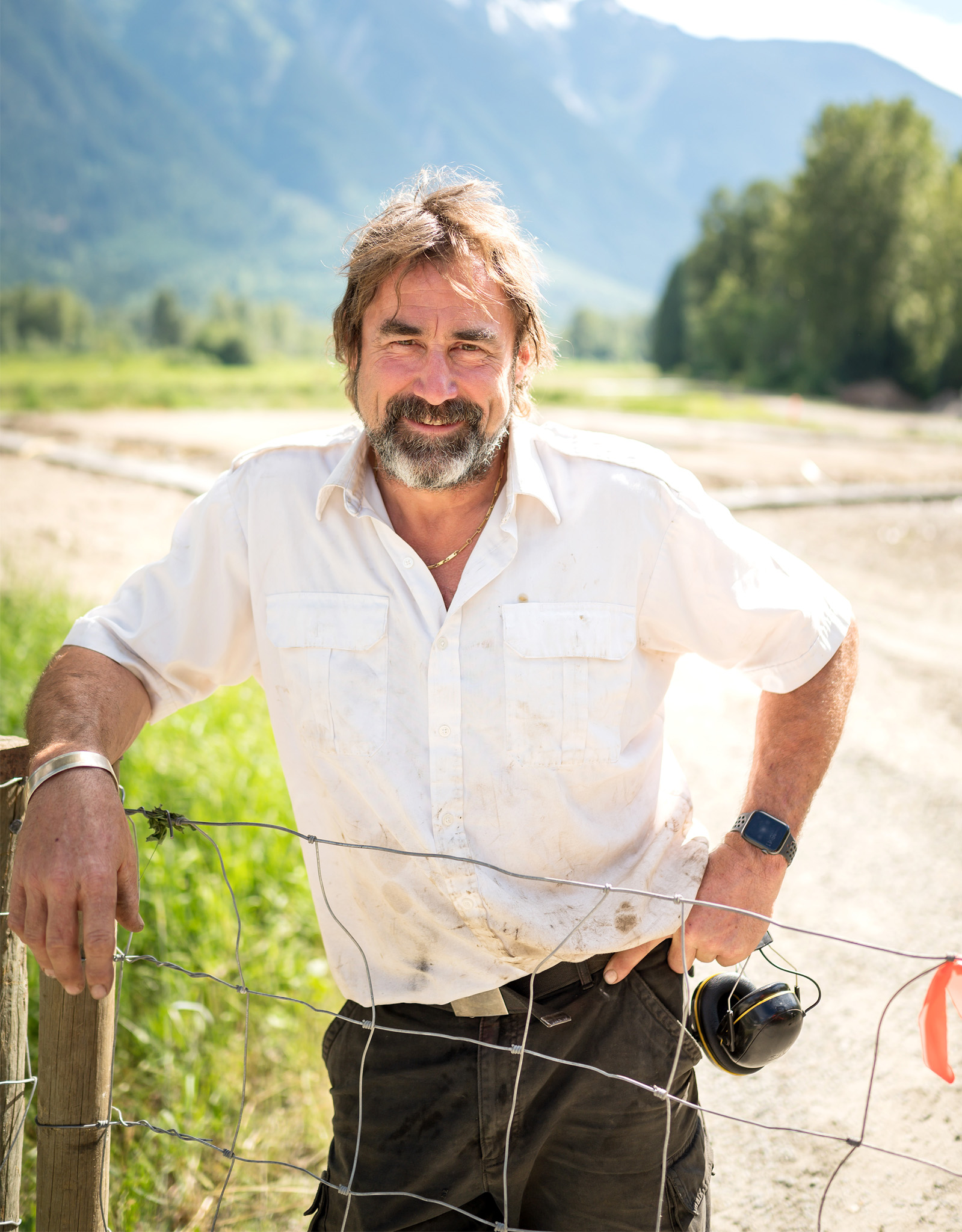 Jordan Sturdy, the owner of the North Arm Farm, Pemberton’s favourite farm, is another guy who I’ve known forever.  I caught him doing some work on the farm when as I stopped in to set up the another photo for the piece and quirky grabbed this.  The Pique didn’t use the photo for the feature, but I just really liked it. 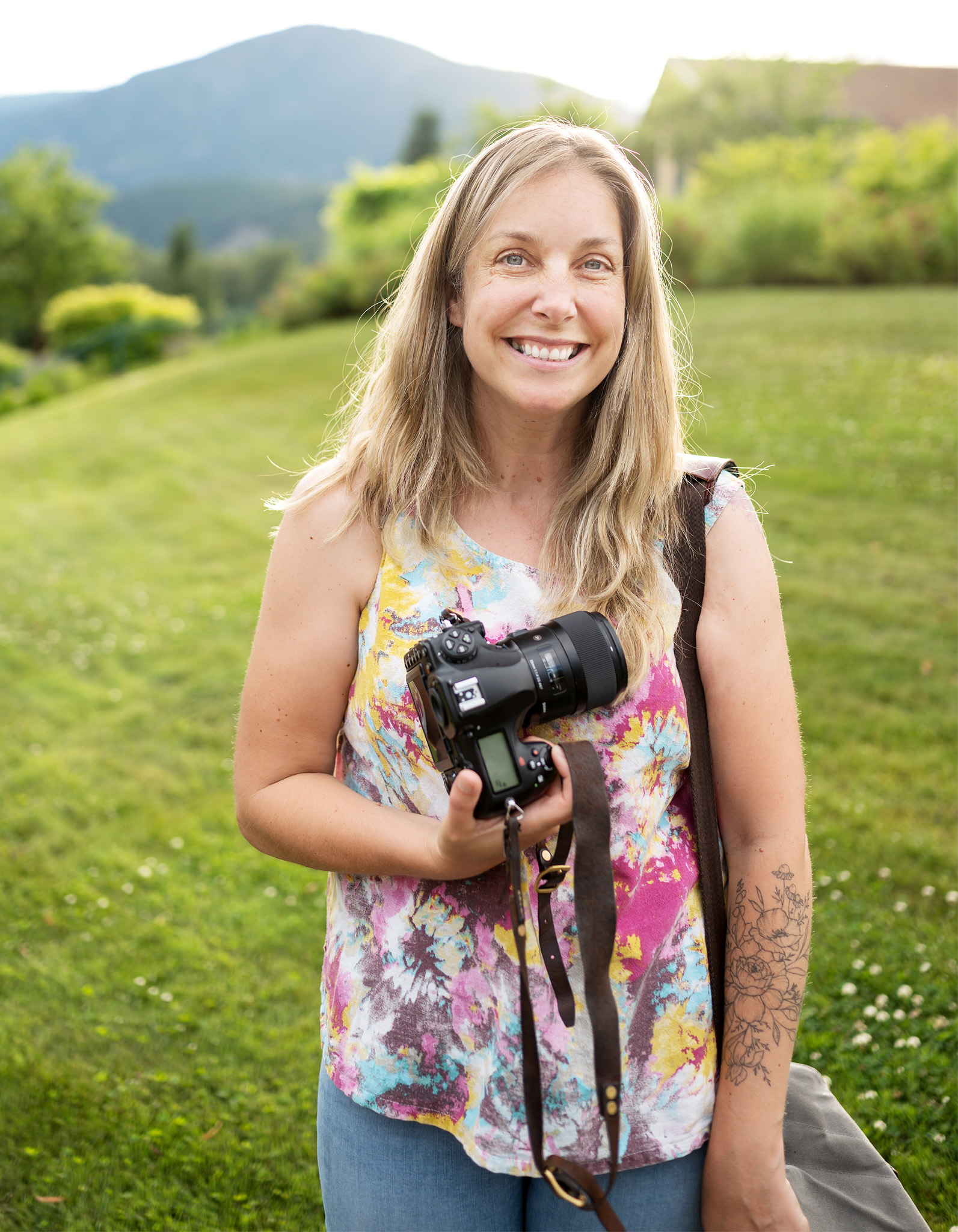 Anastasia Chomlack was Pemberton’s favourite photographer, as well as being an old friend and a former professional rival from the days when I was a wedding photographer.  This was kind of a lucky photo as well, as I was sitting in the back of my truck guzzling down a bottle of water after shooting some photos of the Big Sky golf course (Favourite Golf Course) when Anastasia and her husband Chad walked by and said hi.  She had been shooting some family portraits at the golf course and was just as tired and hot as I was, but I went up to her and said hey Anastasia, I need to get your photo, but I can’t tell you what it’s for.  She was game, if a little baffled, but it turned into one of the best shots of the assignment.

I had just bought a new lens, a Nikon Z 35mm f/1.8, as part of my effort to move to the new Nikon mirrorless camera system.  For years I’ve worked with the big heavy professional Nikon cameras and high speed zooms, which are great, but are large, heavy, and loud.  To give it a good test run, I shoot all the photos with it, and almost all of them wide open.  The results were great, I couldn’t be happier with the results.

The photos of Levi Nelson and Bob Menzel were lit with Godox AD600Pro and a medium, 32×24″ Chimera softbox, which is quickly becoming my go-to light for outdoor studio lighting.